For roughly a decade, there was a pretty substantial gap between the experience you’d get from using a vape pen or vape cart compared to the far superior strength, aroma, flavor, and effects you’d receive from dabbing the very same oil using a properly outfitted glass dab rig with either a titanium domeless nail or a quartz banger style nail along with a torch, carb cap, Crud Buds, and all the rest of the necessary accessories.

However, that partial list above alludes to the advanced, multistep method that one must go through in order to take a traditional dab and while that ceremonial process is something that many of us seasoned heads enjoy, it can be intimidating for those new to vaping oils and it is certainly not ideal for dabs on the go.

So, for years, we settled for pocket-sized vape pens which are still unbeatable when it comes to discretion, but still leave a bit to be desired compared to other methods of ingestion.

That all changed, however, with the introduction of the Puffco Peak in 2018, a pyramid-shaped product that succeeded where no other portable, electronic dabbing device had – it delivered a thick rip very comparable to the most perfectly timed, cleanest quartz, perfectly carb capped dab that you’d get out of any heady glass dab rig.

For close to a year, the Puffco Peak reigned unchallenged in the market. As supply failed to keep up with demand, retailers faced inventory shortages nationwide, and savvy entrepreneurs saw an opening. That’s when we first saw the first real competitor to the Peak, called the Focus V Carta. 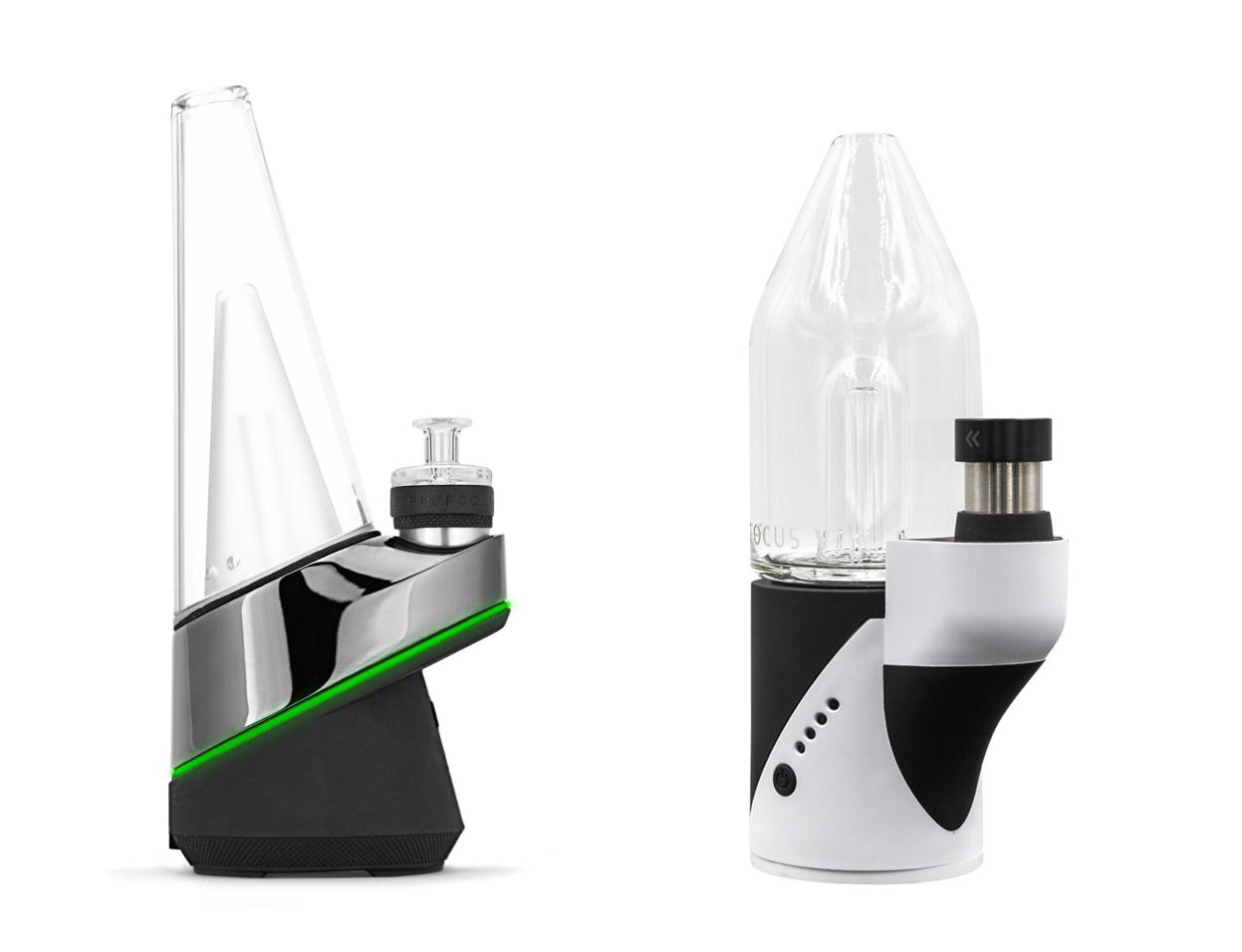 It’s no secret that Puffco Peak owners break down into two distinct camps: They either swear by its superiority, or they use it as a paperweight after refusing to repair it again. The Focus V Carta had the benefit of watching the Peak make the difficult climb to the top of the industry, but did they avoid the same pitfalls on their own path?

We have done plenty of “research” on both products here at The Dab Lab, and due to their similarity we get a lot of questions about both, so we figured we’d give you a rundown of the Puffco Peak vs. the Focus V Carta: Which is Better?

Most reviews of these products wait until the very end to let you know how much the items actually cost – if they even tell you at all! Let’s face it, if you are dabbing on high quality oils, they can put a big enough dent in our budget, so saving money on accessories means more money for terps.

In this head to head, the Carta crushes the Peak in a line item cost comparison of not only the units themselves, but of all of the official accessories and replacement parts that each brand offers.

In theory, you should only need to buy one full kit, but the accessories (atomizers in particular) have the potential to be recurring costs, and the margin between the Carta extras and the Peak extras is substantial enough to give the Focus V Carta the clear edge when it comes to price.

Both the Carta and the Puffco Peak stand right around 7 inches tall when equipped with their standard glass mouthpieces. They both feature a round base under 3 inches in diameter, but the conical form of the Puffco Peak from top to bottom creates a more stable platform making it much less likely to be accidentally tipped over than the Carta.

Both devices are heavier than they look due in large part to the powerful batteries that drive them, but both are still very easy to casually carry around a sesh or event, making anywhere a sesh spot. The ability to pass your Puffco or Carta back and forth between friends, rain or shine, in windy weather or otherwise, is the main reason why these products have catapulted in popularity.

Size really should not be a deciding factor for you here – it’s a toss-up. Maybe shape should be a bigger influence, as the two devices have distinctly different aesthetics.

Similar to most high end vape pens, both the Puffco Peak and the Focus V Carta allow the user to choose between four or more preset temperature levels. As a general rule of thumb, lower temperature dabs will deliver more flavor and a slower onset of effects, while hotter dabs tend to produce larger clouds of vapor and hit harder, faster while sacrificing some flavor.

The Focus V Carta takes temperature control to the next level, though, by offering a smartphone app that will allow you to connect to your Carta via Bluetooth and manually dial in the precise temperature that you desire. That’s hot!

With the touch of a button, your Puffco Peak will automatically heat up the dabbing chamber to the desired temperature in about 20 seconds – much faster than a torch and quartz banger. When it hits that temp, you’ll see the led lights signal the device’s readiness and a gentle vibration in your hand will coax you into taking your dab. The Carta works pretty much the same way but it only takes 5-7 seconds to reach your desired temperature, saving you even more time over the course of the sesh.

Your PuffCo Peak will recharge in roughly 2 hours and will then provide anywhere from 20-30 dabs before needing to be recharged. The battery for the Puffco Peak is internal and cannot be removed without cracking the unit open and voiding your warranty.

The Focus V Carta has a similar battery life but they will allow you to remove and replace the rechargeable battery with a spare. As long as you have an extra battery fully charged, you’ve got dozens of dabs at your fingertips.

The ability to dial in precise temps, the lightning fast heat up time, and the ability to swap out dead batteries make the Carta a much more user-friendly device whether you are sashing alone or if you’re the life of the party.

Dating back years before the Peak was ever introduced, Puffco had a rock solid reputation of making the most sought after vaping devices on the market along with some of the worst customer service to go along with those devices. Whether you go back to the retailer that sold you the product, or if you skip them and go straight to the manufacturer, true satisfaction from Puffco customer service is relatively rare.

Unfortunately, the web is full of complaints about the customer service behind the Focus V Carta as well, with allegations that emailed requests sit unanswered for weeks only to receive copy/pasted and unhelpful responses.

Again, you will find rabid fans of both the Puffco Peak and the Focus V Carta who will aggressively pinky swear that each company is doing just fine handling incoming issues, and the internet is far, far, far more full of complaints than it is compliments when it comes to just about anything, but it is clear that both brands need to do more to stand behind their wildly popular products.

The Focus V Carta offers a limited 1-year manufacturer’s warranty on the unit itself and they changed the game by also offering a 1-month warranty on the atomizers – the part most often replaced. This forced Puffco to match bowls, literally, and they too offer the 1-year on the unit and 1-month on atomizers.

The seemingly overnight popularity of the Puffco Peak, and then the Focus V Carta, not only changed the way that people took their dabs, but changed the way that glassblowers looked at their own trade. Seeing thousands of Peak and Carta units selling with ultra-basic, simple function, glass mouthpiece attachments sparked creativity in the minds of the world’s most talented glass artists and the results have been some intricately heady worked glass attachments that help both the Peak and the Carta raise their form to match their function.

The angle of the tilt employed by the Peak makes things a bit more awkward when it comes to these heady custom or scientific glass attachments, but almost anything is an improvement over the boring standard attachment.

Both brands offer a plethora of official accessories, though Puffco certainly takes the lead in this department with some really useful aftermarket options like their travel kits & cases. The Carta, however, does come equipped with BOTH a titanium AND a quartz bucket. Also, the Carta can technically vape dry herbs as well as oils, though a separate atomizer (not included) is required).

Honestly, as soon as one brand comes out with something cool, the other one isn’t far behind with their own version. They’ve been constantly trying to one-up each other since the Carta hit the scene and that is why competition is always good for the consumer.

Overall, it is awfully hard to recommend the Puffco Peak over the Focus V Carta. Puffco had the advantage of brand recognition but the folks behind the Focus V Carta have proven that they aren’t going away.

The lower price point is impossible to ignore and the user-friendly interface and replaceable battery set the Carta a step ahead of the Peak, in our opinion.Overall, it is awfully hard to recommend the Puffco Peak over the Focus V Carta. Puffco had the advantage of brand recognition but the folks behind the Focus V Carta have proven that they aren’t going away.

Whether you are a diehard member of the Carta Club or if you prefer the Puffco Peak, be sure to check out the handy assortment of accessories and attachments that we carry for each brand here at www.TheDabLab.com to help you get the most out of your portable vaping experience.