Dab Nails are used to vaporize essential oils. They are heated up with a torch or electronic heater coil. A dab is then placed on the surface of the dab nail resulting in tasty vapor.

There are many types of dab nails. Some go inside of glass joints and need a dome to be used. While others go over glass joints and do not require a dome. Every dab rig is designed different and has different needs to function at it's best. This post is dedicated to the different styles of dab nails and covers all options to accommodate any dabber’s needs. If your current setup isn’t working as well as you'd like it to or the glass nail for your dome setup sadly fell off the coffee table, then we have some ways you can improve on your dabbing experience. You can find dab nails made of glass, quartz, titanium, and ceramic.

UPDATE (9/1/20): 99% of Dab Nails are now made of exclusively Quartz. It is clearly the most popular material used for vaporizing concentrates. Most of the designs you will see below are outdated and discontinued. To see the newest Dab Nail designs, check out our blog "The Types and Style of Quartz Bangers".

Glass nails are very inexpensive and often come free with a vapor rig. They must be heated slowly, so they do not crack. They work well and some say they give the best flavor.

Quartz nails, cost a more than glass, but do not need to be heated slowly and last longer than glass nails. If you use quartz nails and dab at the perfect temperature, you can achieve supreme flavors. Glass and quartz nails are a budget friendly option, but they can be hard to keep from breaking. Accidents do happen. 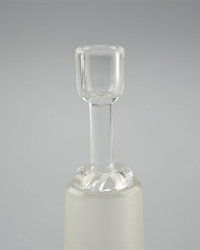 Cons: Will likely break if dropped.

If you are constantly dropping your nails, we suggest upgrading this small bit of your rig to a titanium nail (Ti nail). Ti nails, like Ti Power's "TiPhoon" nails, are made from solid medical grade 2 titanium. Titanium is strong and will hold up to the constant heating and cooling through your dabbing sessions. Dropped your nail? No worries. It’s perfectly intact! Ti Nails have much better heat retention than glass/quartz, so you can take much larger sized dabs. (UPDATE: some of the new quartz nails, like the thick bottom bangers with opaque quartz bottoms have comparable heat retention) 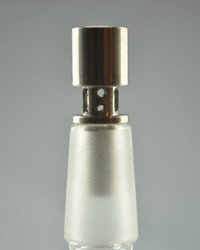 Cons: Not the best flavor and transfers a lot of heat transfers to your glass joint.

So if you heard the hype about ceramic nails, the claim is that it provides the best flavor possible! Now I don't know if that's true, but what I can tell you is when I used the 710 Whip Electronic Vaporizer with Ceramic Nail at a recent glass show, I was thoroughly impressed with how tasty the dabs were. You be the judge. But remember, ceramic is fragile just like glass, so be careful! 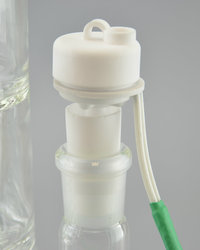 All types have good flavor as long as you don’t dab off of them when they are too hot. Now let's go over the different styles and designs!


This is the most common dab rig setup. Most vapor rigs will come with a male joint and a vapor dome. A standard nail is paired up with this setup and sits in the male joint. The head of the nail is heated and the dome is slipped over it so the vapor does not escape when dabbing. Don’t forget to remove your dome after a dab. They get sticky and can be a pain to get off! Some standard style nails, like the Do You Dab Ti Nails, are adjustable so they fit all vapor dome heights. The Dome and Nail option has slowly faded away and has been replaced by Domeless Nails (see below). 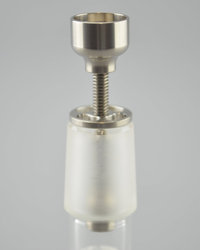 Pros: Cheapest option. Works good outside in the wind. Works with a carb cap.

Cons: Smaller dabbing surface and you have to take the dome on and off.

One simple upgrade that we support would be the move to a domeless nail. These come in quartz and titanium and allow you to be a more efficient dabber. These nails do not require a dome to be put over them to work correctly. Simply heat and dab! Not having to worry about throwing a dome on a hot nail really makes things much simpler. Often these domeless nails are compatible with multiple joint sizes. Standard nails only work with one joint size. Although, most domeless nails are quite large, so they do take a bit longer to heat up than a standard nail.

Pros: Most have great airflow and much bigger dabbing surfaces. No sticky dome! Works with a carb cap.

Cons: Cost a bit more. Doesn't work as good as a dome and nail outside in the wind.

Classic - Designed similar to a standard nail, you will find a column that runs through the center for the length of the entire nail. As you dab around the platform surrounding the center hole at the top of the nail, vapor will travel right into the hole through your rig without any loss of smoke. 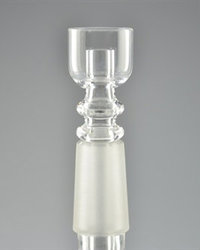 Castle - Looks like a dome with a divot where the hole should be, which is where you place the dab. The edges of the top of this nail have slits in it for the vapor to pass through. This dab nail must be used straight up and down or the oil will spill into the slits. This style does not work well with a carb cap. 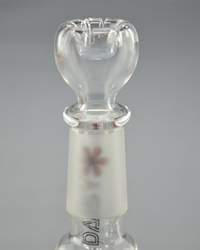 Honey Hole - Similar to the Classic style, but with a couple differences. One being the slanted top which allows for a much larger dabbing surface. Because the large surface is on one side of the nail, I suggest using this nail at a 45* angle with the large side angled down. These nails are also jointed, so they don't go inside the joint causing restriction. 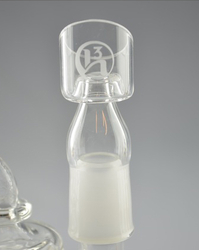 Banger - This style is almost like a Hybrid Domeless Vapor Curve. It extends out like a curve does and has a dabbing pad shaped like the Honey Hole. This is quickly becoming one of the most popular styles due to it extending away from your face and large dabbing surface. The newest style bangers feature larger heads with flat tops. Also check out our article about why we love the new Thermal Banger nail. 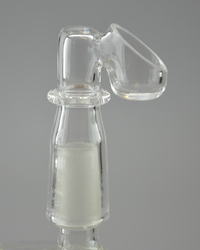 The first dab rig set-up to release was a Vapor Curve with a Titanium Skillet Pad. They curve off your bubbler or bong creating an upside down “U” shape. One end is the joint on your bubbler and the other is an open ended flare. A titanium pad is wire wrapped with stainless steel, so that it can swing out from directly under the flare to be heated. It is then swung back under the flare. As you pull air through it, you dab on the pad. It doesn’t capture the vapor as well as other set-ups, but works great! This setup has similar advantages to a domeless nail. Although, it is harder to see the pad you are dabbing on compared to nails. My favorite feature of vapor curves is the maximum airflow. Most all nails set-ups cause some restriction. This style has been discontinued and replaced by the Domeless Nail style. 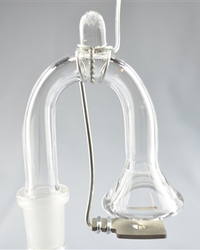 Pros: Lots of airflow and no sticky dome.

Cons: Doesn't work outside in the wind. Hard to replace the pad and get it re-wrapped. Does not work with a carb cap.

We really dig the Blu Sun Glass Ti-pod and can’t get enough. Ti-pod domes and slides feature removable titanium nail heads. Much like a vapor curve, the heads are wire wrapped with stainless steel, so they can swing out of the dome to be heated. That’s right. A dome and nail set-up where the dome doesn’t need to be removed to heat it! Since the nail head doesn’t sit inside the joint like a standard nail, this set-up also has max air flow! It’s the perfect hybrid of a dome and nail setup and a vapor curve setup. It has none of their disadvantages and all of their advantages. If you are looking for a simple design and don’t want to mess with removing and placing a dome every time you dab, then this is THE set up to go with.  This style has been discontinued and replaced by the Domeless Nail style. 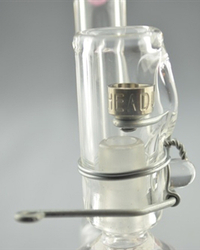 Pros: Lots of airflow and you don't have to take a dome on and off. Works better outside than a vapor curve.

Cons: Titanium is the only option. More costly. Doesn't work with a carb cap.

Now that you are armed with the knowledge of all types of dab nail accessories, visit our on-line store at www.thedablab.com. We carry all of the types of nails mentioned in this post and feature everything from hempwick to one of a kind heady glass art pipes. Drop on by and order the best dab nail for you!