As dabbing cannabis concentrates and extracts becomes more and more popular, even people who have smoked weed for years are being introduced to a whole new way of getting baked that hardly resembles the simple old school methods of flowers and fire.

For those of you who love smoking flower, you’re surely familiar with the sticky and nasty brownish-black resin that accumulates in your bong or pipe. Similarly, after just a few dabs of highly potent hash oil, you’ll notice a slightly different type of build-up which is known not as resin, but as reclaim.

If you’ve been smoking cannabis for as long as we have, you’ve probably had one of those rainy days when you were short on money, short on weed, and short on homies willing to come and hook you up. We’ve all been there…scraping away at our favorite glass spoon pipe or bong slide in an attempt to free up some chunky black resin for a desperate toke or two.

That gooey or crusty dark buildup on your daily driver is the result of layers and layers of cannabis smoke residue, and even though it looks pretty disgusting, it is still packed with THC and other cannabinoids that, in theory, can still get you baked. But, more often than not, pipe or bong resin is just going to give you a terrible taste in your mouth and an annoying headache for a few hours.

Recondensed reclaim from dabbing, however, can definitely be worth…well… reclaiming as there are several uses for it once you rescue it from your favorite dab rig or drop down.

Reclaim forms from your dabbing vapors first as a thin, golden layer of residue along the inner walls of your glass dab rig. As it gathers, it will eventually break off into the water and typically form into small, smooth yellowish-orange balls that float in your water. 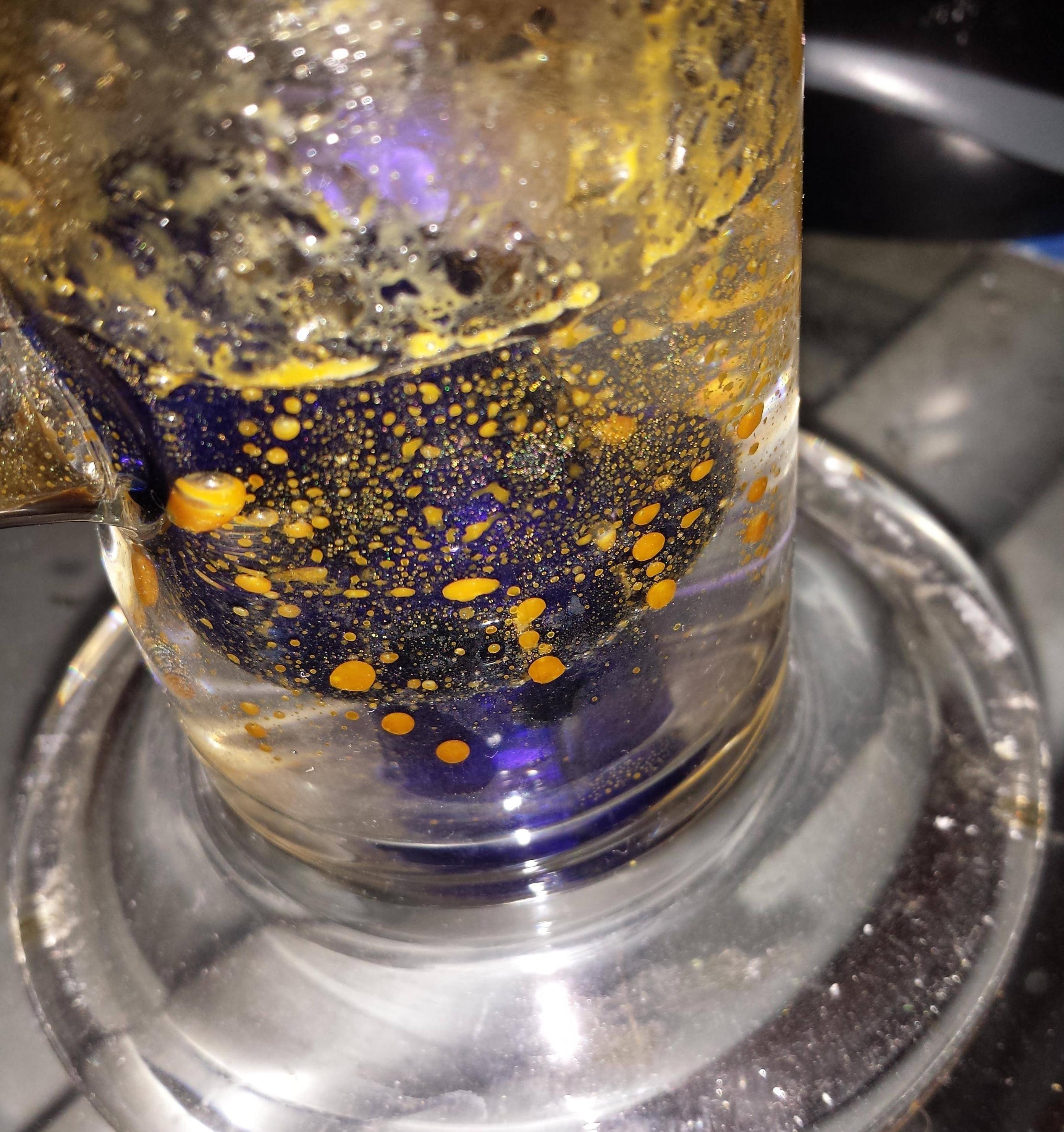 A cannabis testing lab called MCR Labs recently tested several samples of dabbing reclaim and discovered that they not only still had fairly high concentrations of THC (40-50%), but that they were also relatively abundant in at least 4 other cannabinoids, including CBN.

They also affirmed that reclaim is at least 85% decarboxylated due to the high temperatures associated with dabbing. This means that it is very potent when infused or added into food or drinks, and can also be applied topically and be absorbed into the skin effectively.

*Note* Reclaim melts easily into coffee or hot chocolate, and can be applied to just about any food you can imagine. To avoid its spicy flavor and sticky texture, it can be filled into empty gel caps for easy ingestion. BUT, always start slow when eating or otherwise ingesting reclaim. Its effects are quick and hard hitting, then long lasting. You can always eat more, but you cannot undo it.

Of course, you can also dab it again. It will lack a substantial amount of its original terpenes, and due to the elevated CBN ratio it may deliver slightly more sedative effects than you remember from the fresh dabs, but it will give you a much needed head change on one of those rainy days.

HOW TO LAY CLAIM TO YOUR RECLAIM

Reclaim, like pipe or bong resin, is very sticky and unwieldy if you try to manipulate it with your fingers or hands. Just don’t.

Extremely hot water will reactivate it, and if you can loosen and drain some of those large balls or chunks of reclaim onto a non-stick surface like a silicone pad, that is ideal. But water rarely does the trick on its own.

For a crystal clear cleaning, you’ll likely need to resort to a non-toxic cleaner like the ones we offer here at The Dab Lab. Or, for a really sticky situation, perhaps some isopropyl alcohol or grain alcohol.

You really need to consider what your plan is for the reclaim once you have recovered it.

If you plan to ingest it, non-toxic options or grain alcohol is probably your best bet.

Anytime you use a solvent, the reclaim will break down and mix evenly with the fluid solvent that you used. That mixture then must be allowed to spread as thin as possible so that all residual solvent can evaporate out, eventually leaving you with a sticky film of leftover reclaim.

If you really want to smoke or dab it again, the methods above are not ideal, and you should consider investing in a simple  drop down attachment or a reclaimer adapter for your favorite dab rig. A proper drop down will trap a vast majority of your reclaim in a dry chamber before it ever reaches your percolator and your water.

When that trap chamber begins to reach its limit, simply detach the drop down from your rig, flip it over, and apply a gentle amount of heat as you watch the honey-like reclaim ooze its way down and out of your drop down and onto your non-stick silicone surface below. 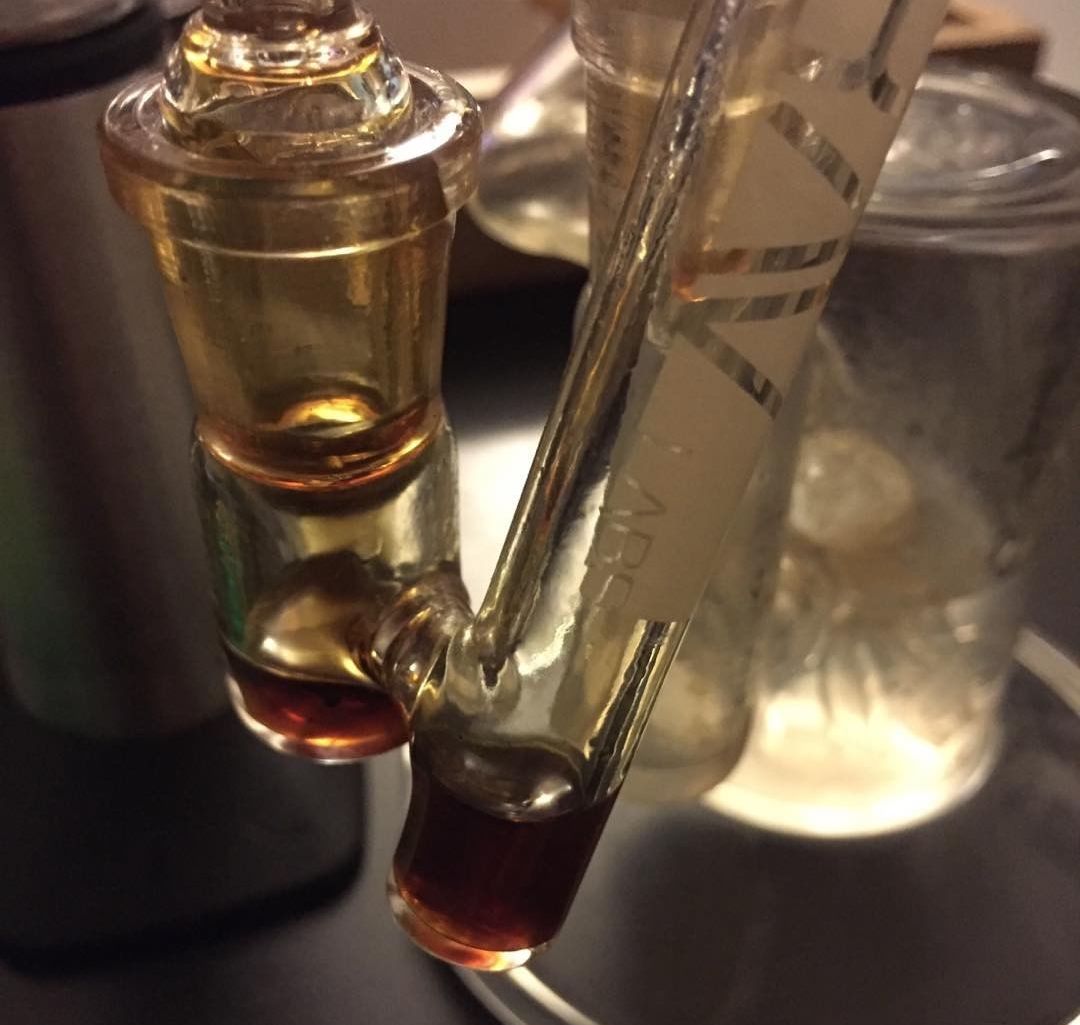 Since no solvents of any kind (even water) were involved in that process, the resulting collection of reclaim should be safe for vaporizing.

Of course, the most common option is to just rinse reclaim right down the drain with the rest of the solvent and water being used to clean your dab rig. A lot of people feel that the time and effort needed to capture and store reclaim is not worth whatever potency or benefits it still possesses.

That is definitely a personal choice, and we certainly don’t save every spec of reclaim after our seshes, but hopefully we showed you that reclaim does have some value if you are willing to harvest it one way or another.

Do you have a killer edibles recipe using reclaim?
Or some other highest and best use for the sticky substance?
Let us know in the comments!